Concert Review: Yitzy is called to the stage by Benny Friedman

I’m sorry. If you missed the Benny Friedman/8th Day Concert, the first in the Chelsea Unplugged concert series, you missed an absolutely awesome concert. Plain and simple, it was such a great night and such a terrific concert, that I just can’t wait for the next one in the series.

I will confess that I wasn’t quite sure what to make of a concert that was being labeled “unplugged”. Sure, it refers to the instruments, but I was guessing this concert was going to have a whole different vibe and as someone whose taste runs to the fairly traditional, I wasn’t quite sure if this was going to work for me. But given how much I loved Taamu (and for all those of you who are tired of hearing how much people love Benny Friedman, I suggest you stop reading right now) I figured it was going to be a fun night. Maybe a little looser, maybe a little less conventional but how could you go wrong?

It wasn’t any one thing in particular that made this concert so special. It was the way all the pieces of the puzzle came together that made it work so well. The venue. The band. The audience. And of course, the wonderful performers. Combine all those ingredients and it made for an event that was truly unique.

Let’s start at the beginning. The concert was held at the Chelsea Shul, Emunath Israel, on 23rd Street in Manhattan, a beautiful, historic building. This was an old style Shul, with stunning architecture, wooden benches, the kind of Shul you don’t see very often any more. The performance was held in the Shul itself, with the band setting up on the elevated area in front of the Aron Kodesh, which was itself a work of art. While the room itself probably held 500 people, everyone was very close to the action. There were no bad seats in this room. I actually spent a good part of the concert standing in the doorway in back, and even from there the view was great. Add to that really awesome lighting and you have the setting for a great concert.

Shai Bachar’s band featured Greg Wall playing both flute and saxophone, Mitch Stein on guitar, Rich Stein playing percussion, Fima Ephron on acoustic bass, with Bachar himself on the keyboard.The band, working off Yitzy Spinner’s arrangments, was perfectly suited to this event.They were leibidic, enthusiastic but never overpowered the vocalists, or to put it a little differently, they really rocked!

Instead of people sitting in their seats just listening, the audience connected with the performers and were actually part of the action. It was really something special and made a great night and a great lineup even better.

And the performers? Amazing. Fantastic. Awesome. I could go on and on for pages about just how good they were, but I am guessing that you just want to read the review. So let’s get on with it.

The night started off with an introduction by veteran concert producer Bernie Dove introducing the Shai Bachar band, who immediately got the audience going with their awesome sound. By the time they finished their opening number, the audience was already pumped and responded enthusiastically when Dove asked if they were ready to hear Benny. Benny came on with Bentzy Marcus and they opened with a set featuring Motzei Shabbos songs. I actually liked that they opened with stuff that was neither Benny Friedman nor 8th Day music.We all know that performers can sing their own music. It is refreshing to hear them sing other compositions and see how well they handle different styles of music. In this case, they were both amazing and it was the perfect opening set for a Motzei Shabbos concert. Benny’s next song, Keili Ata, was composed by the Alter Rebbe and was a beautiful tribute in honor on the Rebbe’s yahrtzeit. While we are always clamoring for more new songs to sing, there are so many beautiful songs already out there and the audience joined Benny singing this heartwarming song.

If you thought the night was going to turn into a kumzitz, you thought wrong. Benny’s next song was Taamu, the title track from his album and the electricity in the room was palpable, with everyone singing along and moving with the music. After only a few songs, it is obvious why Benny has become such a hot commodity on the Jewish music scene. Listening to his CD, you can hear how talented he is, but seeing him live you realize just how much he loves people and how he connects with an audience. And people just love that. They don’t just want to watch a performance, they want to be a part of it. They don’t want a singer who stands on stage and smiles benevolently because he knows how talented he is. Audiences want to see a performer who is happy to be there and so clearly appreciates the people who are spending both their time and their money to come to a concert.

8th Day took the stage next, amid chants of “8th Day, 8th Day!” and once again, I was surprised by just how good they were. The led off with Yiddish Country, followed by (what else, but) 8th Day. I am imagining that an audience like this is every performer’s dream. So enthusiastic, so into the music and so leibidic as it was obvious that everyone there was having such a great time. Next, Bentzy told a story about traveling to the Ukraine where he visited some cousins. Their famous uncle, Avraham Fried, had sent some CDs but they were still sitting in their shrink wrap, because they had no CD player. The sight of those CDs still sitting unopened, moved Bentzy so much that he composed a song on the plane home from Russia about both the miracles we have in our lives and all the miracles we need to get through life. That song, Rain, was their next number followed by the last song of their set, Tracht Gut, after which they left the stage amid thunderous applause.

And the applause just kept on going as Benny Friedman took the stage singing No Lyrics. Without exaggeration, you could feel the energy in the room as the crowd joined Benny singing this infectious niggun, which only went through the roof when Benny asked the band to stop playing, while both he and the audience kept on singing the song. The next song, Moshe Laufer’s Elokai Neshama was beautiful and simple and Benny’s delivery was perfect for the song. Next up, another slow beauty, Batuach Ani, complete with Benny’s own yud gimmel middos harmony that I just loved on Taamu. After two slow, chilled songs, Benny rocked the house with Letova and again I don’t think there was anyone in the room who wasn’t singing along.

Next, Benny told of how Avi Newmark sent him a beautiful song called B’sheim, which reminded him of a story he had once heard from Israeli soldiers. The chayalim told him that normally, they managed to keep their fear in check, but one of the rare moments when they just couldn’t manage to conquer their fear was when crossing a mine field. The soldiers sang a song to remind them that Hashem is always with them, with the timeless words from Krias Shema Al Hamita, which say that the Malachim are on all four sides of us, watching over us. Benny invited surprise guest Yitzy Spinner to join him onstage, which was a surprise not just for the audience, but  for Yitzy as well who had no idea he was going to be  singing.  Nonetheless, Yitzy came up, picked up a guitar and did a gorgeous duet with Benny, with a comedic moment when Yitzy asked Benny for the key. Benny responded saying “I don’t know chords, just go like this (he mimes strumming a guitar) and I’ll sing.” Clearly the crowd loved the song because it ended amid cheers of “One more time! One more time!”

Benny took a moment to for thank you’s: producers Avi Newmark, Avram Zamist and Bernie Dove, the sponsors,the entire audience for coming, the friend who came to the concert even though he was probably missing his own Sheva Brachos, his in laws, his wife, his uncles and his entire family. Then he spoke briefly about people he knows personally who are going through difficult times and the tzaros that Klal Yisroel as a whole seem to be experiencing and asked the angels on high to intercede on our behalf as he sang Chaim Yisrael’s Malachim.

The concert would not have been complete without a mention of Benny’s recent trip to Mumbai in commemoration of the first yahrtzeit of the Kedoshim who gave their lives there. Yitzy Spinner returned to the stage to join Benny in singing his touching composition Chasoif, which was poignant and unbelievably touching, with a fabulous guitar riff by Mitch Stein. Benny led the crowd in another rousing chorus of “8th Day, 8th Day!” and the Marcus brothers took the stage, singing Yiddishe Mama of Mumbai. Continuing with the Mumbai theme, Benny told how he and his wife stood in the streets of Mumbai on the day of the yahrtzeit, hearing students sing the timeless words “Kol haolam kulo gesher tzar me’od” in Hindi and then went on to sing the song in both Hindi and English. While the mood in the room had turned slightly somber recalling the horrific massacre, this song was uplifting and inspiring and as the song just got faster and faster, amid swirling lights, the entire room was energized and everyone was singing along and going absolutely wild.

The energy level in the room just kept on soaring as Benny launched into Moshiach, from his Taamu album, along with a great Greg Wall saxophone solo. There was the requisite dancing in the aisles, clapping, singing along and by this point in time, I don’t think there was anyone in the room who wasn’t having an amazing time.Poor Bernie Dove. I don’t think anyone was too happy to see him get up on the stage and thank everyone for coming, as the crowd chanted “We want more!” But all concerts have to end sometime, and as the lights came on, people stood up and began putting on their coats.

G-d bless Bernie who shouted out “Turn the lights off!!” followed by “Do you want another song?” The audience was more than ready for an encore and Benny and the Marcus brothers certainly delivered, first with a fabulous rendition of Yaavducha and finally with one last rendition of Moshiach. After that, with his trademark humor, Benny thanked everyone for coming and told everyone to please drive safely, pointed to one audience member and said “except you. You are drunk.” Another moment that just showcased Benny’s charm, sweetness and terrific sense of humor. And you thought Benny was just another good voice? This guy has it all and is so endearing that he is even better live than he is on his CD.

All in all? This was an awesome concert. Great music, everything done right but still chilled and a crazy good time. While it certainly was a don’t miss concert, no need to get all sad and morose if you missed it, because this was just the first in a series of Chelsea unplugged concerts. There will be plenty more top notch music coming your way from this seasoned team of producers. Stay tuned for details of upcoming concerts which will be released as soon as they are available. 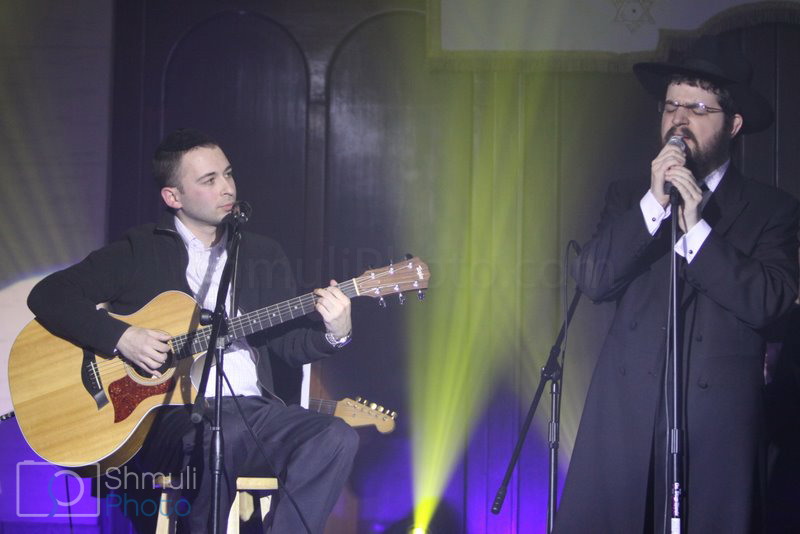 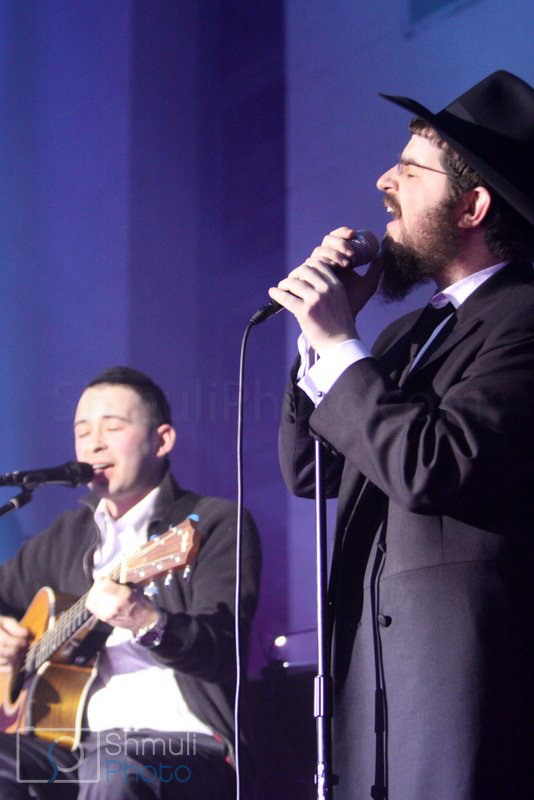